Since the global economy is to be reset, this is a good time to reimagine company and organisational culture.

We regularly state that ‘culture’ is a key if not the most important factor in business success, yet most businesses are still playing out in other areas without visiting the culture within. Company culture can now be easily measured and this year we worked alongside the guys at 1872Culture with their diagnostic which gives a clear temperature check on what is happening under the bonnet.

Organisational culture is a funny thing. Most agree largely that it is important. Seldom do we hear ‘ Naw, it’s not that important at all. If company bosses are asked about their culture they will use positive terms and descriptors. Nobody wants to admit that their culture is poor. The same is true for employees and if they think the culture is bad, they have an eye on exiting. Employees don’t leave jobs or companies, they leave poor cultures or managers who uphold that defective culture.

Can culture be changed?

Of course, it can. Is change costly? Yes, it requires the investment of time and effort as well as financial resources but the cost of not changing is often ten-fold or indeed terminal.

Culture can often be referred to as ‘soft’ just like customer experience can be referred to as ‘soft’. These skills and environments are far from ‘soft’ but instead are ‘human’ factors. They are ‘power skills’. Culture is very tangible in any business. The behaviours of the business or its organisation through its employees are a direct correlation to its culture. Organisational culture is very simple to define. It’s ‘how we do things around here’. In addition, it is also quite simple to measure. The volume of research in this field is both astounding and exciting.

Those who are plugging into it are experiencing positive changes despite the disruption faced.

In the current era of the ‘Experience Economy’ – the idea is that the value of the experience in dealing with a business goes way beyond their products and indeed pricing and into the total experience.

As society reopens, experiences will not only continue to play a vital part in business, it will be the main reason why consumers, visitors, clients, etc decide to buy and return.

The Customer Experience covers the entire journey and then some more. Creating better experiences will continue to be the battleground for a share of the competitive market. This is relevant in all sectors and is as important in engineering as it is in retail.

The great challenge however is that our focus on skills, training, education and development is not matching the importance of creating better experiences.

To find out more about how we can help you gain more control of the consumer battleground, contact us here today.

In delivering the Sales Psychology module in the National Sales Apprenticeship yesterday, it was lifting to hear young students reflect on when they had to practice resilience in their personal development.

Resilience is something sales students must understand because it is something they will require in the competitive economy.  It is here where there are more refusals than acceptances. If we don’t address and create modules of learning around human skills such as resilience, we are walking young students blindfolded into misunderstood disappointments.

We spoke about failing forward and learning from the failures but making sure we reflect and acknowledge failure as part of the process of learning. These human skills are a vital element of education in sales, and of course elsewhere.

SalesSense International, Salesforce, and Tesco Mobile are three of the many companies that have young committed students working in professional sales positions with this work-based learning approach. 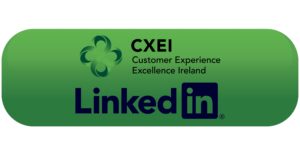 Last year we were appointed by Fáilte Ireland to work with their Tourist Information Centres on a project entitled: The Welcome Way. The programme focuses on making the engagement with the visitor to the Information Centres a World-Class experience.

Covid-19 naturally had an impact on this but the teams across Ireland have been busy on various projects which prepare for this summer of Staycations. In addition, they are looking ahead to 2022 and the return of the International visitor, so important to our economy.

It was an honour to have the first of the Customer Experience workshops with the staff from the Fáilte Ireland Tourist Information Centres across Ireland. To say they are excited to be getting a number of the Centres open is an understatement and the pride in which they approach their work is refreshing.

This morning the focus was on doing simple things extraordinarily well. We looked at what visitors are most impressed with while popping into the Tourist Information Centres. We discussed the importance of product knowledge and digital skills but the need for high levels of the human touch as the visitor seeks those genuine and authentic connections as part of the overall experience.

We recently completed a phase of work today with the impressive HB Tunnelling Ltd. It is a rapidly expanding and innovative company that provides a wide range of specialist services in engineering and in particular, trenchless tunnelling.

Our work with the management team over 6 months was around client experience. Through continuous improvement in ensuring that the quality of service and relationships matches the technical excellence of the company.

It was impressive to watch the team search to reach a better understanding of the human skills aspect of engineering. It is here where these vital skills play their role in a competitive marketplace. There is so much to be learned in different sectors and a part of our role is to share best practice from other non-competing examples. Safety is an integral standard within this industry. HB Tunnelling doesn’t stop at the crucial physical safety of their workforce but they now explore where they can support better mental health safety as well.

This says so much about their culture.

Lots can be learned from this proud company that is growing impressively but are not resting for a moment.

The Brendan Voyage – Navigating through Change

Naomh Brendan Credit Union are based in Loughrea, Co Galway. I have had the pleasure of working with them for over a year now on a project of establishing a compelling vision and understanding their ‘Why’.

The navigator was an interesting man. There are many who believe that he, not the congratulated Christopher Columbus, discovered America. The fact that natives welcomed them on the beach suggests that neither did! Not only did Naomh Brendain sail from Ireland to America, but he also did it at a time when only wind power existed.  As a teenager, I read the story of Tim Severin who replicated the original St Brendan Voyage in a leather-skinned boat. I was to later visit the boat’s resting place and I touched it. I was and still am intrigued by the story. It has deep meaning. We need deep meaning in these uncertain times.

Like many of us, Naomh Brendain (St Brendan) Credit Union is navigating through disruption and inspired by the story of St Brendan they are navigating so as to create a better community. They are a caring and committed team which includes the 12 staff in the office and the volunteer board. They do not have ‘customers’ but ”members who also share in the current voyage. I was delighted to work on this project. From it, I have been asked to work on other Credit Union projects. Next up is the impressive Ballyfermot and Inchicore.

This year, the Naomh Brendain team discussed, debated, dug deep, got huffy, re-energized and came up with their ‘Why’, their vision, the purpose of their existence. They decided to keep it short but encompassing –

‘Together building a better tomorrow for our Community’.

The Values which will steer this vision are:

Every single word decided on by the staff who deliver the service offer. They will write the values on the walls but they will feel them in the walls of the Credit Union. They own it, they are responsible for it and they took this to the board and the board acted as servant leaders and backed it 100%. No outdated hierarchical nonsense. Positive organisational culture. Empowerment, collaboration, vision. Impressive. It is clear that leadership is a behaviour and not a position at Naomh Brendain Credit Union and because of that leaders emerge. Naomh Brendain Credit Union have nearly €60 million to lend so this is not a small entity. It has huge financial power with a huge social impact ability in Loughrea. There are over 250 of these in Ireland – think of the impact they can bring locally and nationally.

The Naomh Brendain Credit Union objective – to be in a position to be the ethical lender of choice so that the community can build a better tomorrow. To allow heating oil to be purchased, to allow students to go to the University/Education avenue of choice, to allow for a house extension. To allow people not alone to survive, but thrive. The ‘Naomh Brendain Way’ is an interesting project. This Brendan Voyage is sailing and the Credit Union here will succeed and it will also thrive. Watch the growth and that includes its people.

So, when you get the ‘Why’ clear, the how, the what, the where and the when will follow.

NOTE – During the last 6 months of this project Donal (in the red jumper in the staff photo above), a Naomh Brendain Credit Union Board member and Tim Severin who wrote and sailed the Brendan Voyage both passed away. Let us all remember them as they would have supported this Credit Union Voyage.